Live, die, copy-paste, repeat: Everything is recycled now, including ideas 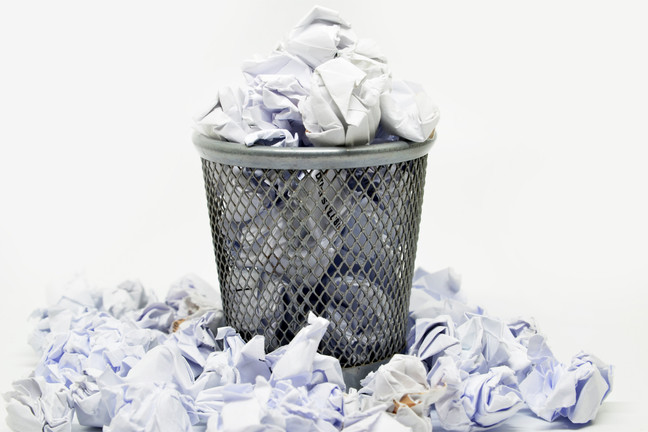 Something for the Weekend, Sir? My house has gone missing. Where it used to be, there is just an absence, a nothing. I guess you could call it a gap in the housing market.

Like yourself, I was intrigued after reading about FourKingsMap last week to see what four rude words might describe the location of my old front doorstep back in Blighty*. Unfortunately, my previous abode is no longer where it was. Maybe it took things too literally when I told everybody I was going to “move house” and it tried running down the street after the removal van.

I called the present owners of the property to find out where the house might have gone. Had they misplaced it?

The owners were surprised to learn that their home had vanished, especially since they were in it at the time – in bed. In fact they sounded more annoyed than surprised, claiming that I had woken them up. This was despite the fact that I had made an effort to account for the difference between our respective world clock time zones by getting up in the middle of the night especially to make the call. “It’s 3am here!” I laughed, self-deprecatingly. “What time is it over there?”

They assured me the house was still where it was and wished me a good night – somewhat abruptly and ungraciously in my opinion, given the efforts I had gone to in their favour. So why does FourKingsMap show it as missing?

Well, obviously it can’t show it as missing as it’s missing. I made a screenshot of my old house’s missingness to share with you but it wasn’t very interesting to look at as it’s not there. Like when you contact app customer support to tell them nothing happens when you tap on a certain button and they ask you to send in a screen recording that shows the problem; so you send them a video of nothing happening.

The issue, no doubt you have guessed, is with OpenStreetMap which underlies FourKings’ sweary three-metre plots. Google Maps, Apple Maps and even my hopelessly terrible in-car sat-nav assure me the house is exactly where I was sure I’d left it. This raises the question: why does OpenStreetMap uniquely omit my ex-house from its database while showing those of all my ex-neighbours? (Notably, it also answers the question as to why those Yodel deliveries never turned up.)

I suspect a bit of half-arsed, casual data recycling by an OpenStreetMap contributor might be the culprit. Either that or a worldwide conspiracy of paedophilic lizard aliens to no-platform my previous abode and re-landscape its digital location with a false pandemic narrative mountain overlooking a fake vaccine lake. Anyone got some tin foil and a spare yellow tabard? I must remember to post more messages to Twitter, Facebook, LinkedIn, Instagram, Pinterest, Reddit and TikTok to tell the sheeple how governments are tracking my personal life.

Recycling is generally regarded as a good thing – as is upcycling, to some extent downcycling and, of course, cycling. The original map data of my old street must have come from somewhere and I guess it just got a bit garbled along the way.

Perhaps my house slipped unnoticed to the floor as an OpenStreetMap contributor’s Mum moved the data off the kitchen table onto the bottom stair to be taken up to the spare bedroom later because dinner was ready and she was fed up with data lying around all over the place.

Now, not all recycling is a good thing. French 1980s crooner Ringo’s recycling of “Video Killed The Radio Star” – the Buggles hit that launched MTV some 40 years ago – is a case in point. Its lyrics were incomprehensibly recycled as “Who’s That Big Black Crow?” and its video featured the popular MOR singer in an Elvis fancy dress costume with Madonna’s bra cups glued onto the shoulders, miming the finest air guitar performance you will ever see for a song with no guitars on it, in the middle of a children’s playground patrolled by Dementors while a man runs around without any trousers on.

It’s like every John Waters movie you ever saw rolled into three minutes. A masterpiece.

You will be pleased to hear that most of the contents of my old house were recycled. Chairs and sofas found new bums to sit on them; unfashionable clothing (i.e. everything on my side of the wardrobe) went to charity shops for NGO workers to gape at in horror when unpacking them from airdrops all around the developing world; and even the teetering Manhattan of cardboard boxes in the garage ended up being recycled into more cardboard boxes.

The one problem I had at the time was what to do with obsolete tech kit. I had tons of it because I could never bring myself to get rid of any “just in case”. I did sell an old gadget on eBay once upon a time – an 88MB Syquest removable drive, I think it was – only to find later that very week that I absolutely needed it for an urgent project. I never disposed of anything ever since.

Oh, yes, I’ve had all the beardies chuckling: “If it were me, I’d use that pile of 512 kilobyte Compact Flash cards as the basis for a home media server” or “Those broken mice could be turned into a the command module for the Mars mission if you slap on a bit of Sugru.” But not a single one of these smug bastards would actually take any shit off my hands when I was moving house. Not only is obsolete tech hardware tricky to recycle, it seems you can’t even give it away.

The only thriving sector of tech recycling appears to be in the field of ideas.

It’s the only way I can explain the rise, fall, rise, fall and rise again of handheld gaming consoles. I’ve been through a few myself, starting with Nintendo’s monochrome dual-screen LCD Donkey Kong II in the early 1980s. My all-time favourite handheld console, which I find impossible to justify, remains Sega’s Game Gear (basically a compacted Master System), which was the size of a brick and weighed as much as two.

According to research, 70 per cent of gamers prefer playing games on smartphones than PCs and consoles. And yet dedicated handheld consoles keep coming back on the market again and again.

Not only are the manufacturers recycling the form factor, they are increasingly recycling older platforms for newer generations to lap up for the first time. Retro Games has even promised to bring back two dozen 16bit Amiga titles from the 1980s to run on its forthcoming TheA500 Mini console. The device is said to be able to emulate both the Amiga A500 (original and enhanced chipsets) and A1200. Just imagine the faces on those hipsters when they experience Battle Chess, Worms and Speedball 2 for the first time!

Well, I am not going to be left out from the recycling craze this time around. With one eye on protecting our environment and the other on reviving culture from the past, there’s a lot we can all do. For example, I have stopped flushing harmful dishwasher detergent into our fragile seas. I’ve done this by switching to disposable plastic plates and cutlery which I can dispose of without having to clean them. Disposal is achieved through the car window as I drive past my local park, where fellow citizens can recycle them for their own use. Their gratitude is palpable as they wave at me with their fists and shout something or other in gratitude as I speed off.

That just leaves the bloody TiVo. Everybody used to want one of these a while ago; everyone except me, that is. My internet provider asked me if I wanted one for free, and I said no, so they sent it to me anyway. Could I get rid of the bloody thing when I moved house? Even my internet provider refused to take it back. And all those people who used to get excited about TiVo began bleating about mine being “the wrong type”.

It’s not like it can’t rewind or goes too far.

Alistair Dabbs is a freelance technology tart, juggling tech journalism, training and digital publishing. He believes there should be a law dictating that toilet paper should be made uniquely from recycled fibres, since the life journey of toilet paper is a one-way trip. If there’s any recycling to be done, it’ll have to be before it swipes your bum. More at Autosave is for Wimps and @alidabbs.

How to Make Southern Candied Yams !!

What is Xanthan Gum? - How is it used, and can it affect your health?